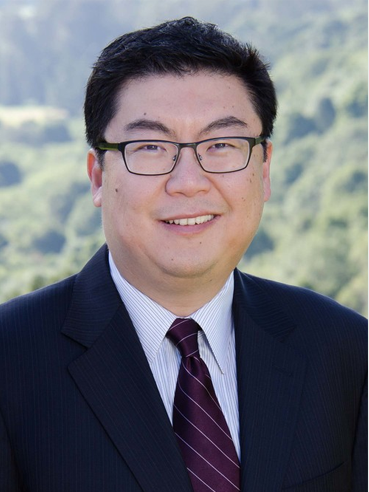 And a never-wavering determination to do right in support of his clients.

Attorney Jim Yu can be counted on to bring all of these important qualities to every case he handles.

Clients and colleagues recognize Jim as a “go-to” person for his knowledge, integrity and ethics. He is known for being patient, thorough and positive.

Jim learned at an early age about the importance of strong standards and ethics. An immigrant himself, he learned about the many opportunities afforded those who live and work in the United States. He also saw first-hand the injustices that often prevent others from living full lives.

Jim was inspired by his family to work hard and prepare to be the strong and effective advocate he is today.

A 1995 graduate from the University of California at Berkeley with High Honors, he worked two jobs to support himself. He earned his law degree in 1999 from Georgetown University in Washington, D.C., where he specialized in personal injury law.

While many of Jim’s fellow students became corporate attorneys in New York and D.C., Jim returned to the Bay Area after graduation to begin his career as a personal injury attorney.  He has helped people from all walks of life obtain the compensation and medical care that they deserve and need. Through negotiations, mediations, arbitrations, and jury trials, he has recovered millions of dollars on behalf of his clients.

In the spring of 2013, after a decade with a highly-regarded Bay Area personal injury firm, Jim opened up his own law practice in Walnut Creek. In 2015, he opened a satellite office in Santa Clara to better serve South Bay clients. He continues his commitment to serve injury victims and the community at large.

Jim is honored and humbled to have been recognized for his professionalism and accomplishments with a number of awards and ratings:

Jim speaks Mandarin Chinese and some Spanish, in addition to English.

Jim Yu will help you hold the wrongdoer responsible and get you the compensation you need and deserve.

Outside of work, I am passionate about oddball cars and unorthodox travel. I especially love 1970s and 1980s French and Japanese cars. I am an avid Formula One car racing fan. I have traveled 15,000 miles on the Pan-American Highway solely by bus, from the Arctic Ocean down to the tip of South America.

Hi Jim, Thanks again for mediating the disagreement this week. You did a fantastic job helping both sides gain something from this miserable experience. I am so happy that we live in a country where services like yours exist to put situations where they belong, behind!

Thank you very much Jim. It's been a very positive experience having you as our advocate. We will happily direct others to you whenever possible. Thank you!

Thank you so much for all your help. It was a physically and mentally stressful time, so I am so grateful for your guidance and answering all my many questions! Of course I hope to not be injured another time but if history repeats itself, I would hope to work with you again.

We will definitely be referring you to our friends and family members. You are an outstanding attorney and an overall awesome person. Thanks for your patience and having our backs throughout the process.

I have been meaning to send a note to thank you for the amazing work you did for my mother last year. I have worked with a lot of lawyers in various capacities, and you stand out as someone who truly cares about your clients and your work. Thank you for being so diligent, professional, and kind. I make sure to recommend you anytime someone needs a Bay Area lawyer.

You persevered with me, and you kept me updated each step of the way. I felt completely safe in your capable hands and consequently, never sweated the details.

Thank you again for all your hard work with my case and being in good communication with me throughout this process. You are a great lawyer! THANK YOU!!

The pleasure of working with you was all mine. Your experience and kind personality were a huge help in getting me through this incident with peace of mind. I will definitely refer you to anyone I know who needs a personal injury lawyer.

Frankly, I wasn't so sure we'd be able to settle with [insurance company]. Thank you for your patience and professionalism throughout the mediation. I was impressed with your poise and calm demeanor and could tell that [client] appreciated your fine representation of her.

Thank you for handling my case. It was a good experience doing business with you and I very much appreciate it. I pray to God that I will never need you again for the rest of my life for myself and my family. But I would love to recommend you to anybody else I know when an accident happens and a lawyer is needed.

Thank you so much for fighting for me, Jim.... I appreciate it and all your honesty along the way.

I really appreciate you helping [Client D] through it. I couldn't feel more lucky to have referred her to you.

Thank you again for your time and effort for [my disabled son].  We truly appreciate your care and concern for [my son] and others like him. You are a reminder there are good people in the world. Thanks for sharing your talents with us.

I admire your professionalism, quick responses, and fantastic communication skills. I will recommend you. Thank you very much for everything that you have done for me.

Jim was great he helped me navigate a very complex claim that involved both personal injury and workman’s comp. Jim was very patient and took his time building the case against those at fault and kept me in the loop every step of the way. He turned a very unfortunate incident and made it into a good one for me.

We found Jim to be caring, compassionate, and kind. He was trustworthy and thoroughly helped us through the legal process. He was very patient with us and very aggressive for us. He was considerate, well-mannered, and thorough.

I would recommend Jim as the “go-to” person for anyone who has personal injury or professional malpractice issues. Anyone who has felt uncomfortable talking with attorneys can know that Jim is friendly and approachable. As a fellow attorney, I always find Jim’s thoughts and analyses on complex legal problems to be highly insightful.

I want to thank you for your consummate professionalism and advocacy in our case against [large multinational corporation].... Again, many thanks for all your hard work. We will certainly be recommending you in the future.

Thank you for truly making the world a better place!

We know who you are, and we know you are good.

Wow, Jim! Thank you! We are very excited and happy with the outcome. Thank you very much for your work. I am still kind of in shock, and don't know what to say, but thank you!

You will not find an attorney with more integrity.